Everyone’s heard the fasionista phrase: “_____is the new Black.”

Horror fans are particularly familiar with this phenomenon of phases. We are fans of a (mostly) populist form of entertainment, thus our “fresh meat” is dictated by the tastes of the masses. Usually that taste is bad. A big factor of the recent resurgence in Vampires is the teeny-lit hit Twilight. Now I’m not going to hem and haw about something I am clearly not the target market for, the internet is full of misplaced hate and I try not to traffic in it. But with the “bad” inevitably comes the good, ah the duality of all things. This article will detail what works provide the Ying to Twilight‘s Yang.

Where was I? Oh yes: Vampires are the new Zombies. Remember that crazy phase? It started with 28 Days Later, and petered out around, well now I guess. But this article isn’t about the moldy dead…it’s about the pointy-teethed dead.

So with no further philosophizing, I give you the best of the new dead (in no particular order): 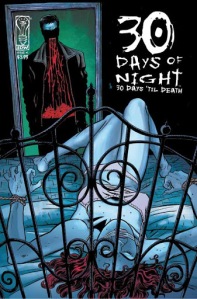 I was never fully down with Steve Nile’s vampire franchise I liked the first graphic novel a whole lot (I prefer to call them comics, I find the whole “graphic novel” rebranding pretentious– it suggests ‘comic book’ is a dirty word). But I felt the subsequent sequels suffered because they feel too much like spin-offs. I wasn’t crazy about David Slade’s film adaptation either (I loved Slade’s Hard Candy so I had high hopes for the 30 days film, the cinematography was certainly fetching, but the film was just meh).

This new one-shot caught my eye because it is written and illustrated by indie-comic critical darling David Lapham (Stray Bullets, Young Liars).At first I balked at the nearly 20 dollar pricetag but was convinced by my local comic shop’s “the staff recommends” sticker that this was a wise decision (I trust the staff at Comicopia that much). I’m glad I did because I really liked this.

Lapham’s trademark retro Lichtenstein-esque art style combines with some really twisted storytelling to great effect. The book is sad, gross, scary and funny, sometimes all on the same page.

The story of a rogue vampire, Rufus, who tries to “settle down” and live an inconspicuous (un)life after a group of elder Euro-vampires sends out a hit squad to quell their noisy American offspring in order to better cover-up the existence of vampires. Rufus gets a dog, is nice to his neighbors and kidnaps a heroin addict and sobers her up so she can pose as his “girlfriend.” The whole plan goes to hell when more vampires from his past come knocking at his door. Short (around 90 gorgeous pages) and enjoyably bleak, 30 Days ’til Death is probably a safer bet than any movie currently in theaters.

Let the Right One In

If I would have had a blog when I first saw this film last year I would have blogged it a freaking sonnet. I love it that much.

As it stands now I’m late to the party, but it still has to be included in any list with the word vampire in it. Not a horror film perse (I mean its got vampires, but its also got LOVE) , this dark coming of age tale is melancholy, hopeful and remarkably moving.

No synopsis is needed. Just go buy it, rent it, whatever just see it. If you have the capability I would suggest the Bluray, this film has both inner and outer beauty.

Once I got over my initial skepticism I realized that True Blood is a great show that never takes itself too seriously, but knows when it’s time to back peddle off the preposterousness and let some weight in. It is a precarious balancing act, and one the show takes a few episodes to convince the watcher it can do, but once it hits its stride it is the most addicting watch on television.

Watching the show in an apartment full of young people like myself I watched my TV sessions balloon from me alone to me with my roommates, their girlfriends, even their sisters. I’ve lent the discs around the house so much it seems like we’ve all seen every episode at least twice, just by being around people trying to catch up.

Anna Paquin is great as Sookie Stackhouse but the real draw here is the eclectic cast of supporting players. HBO consistently casts the best ensembles television has ever seen, and Blood is no exception.

Do yourself a favor and grab Season One now. The new season starts this weekend, so you might have some catching up to do. The discs come with cast and creator commentary on a bunch of episodes and include all of HBO’s clever viral marketing for the show.

There ya go….three blood sucking good times. But wait there’s more! This was only part one of a two part series. Next time I will be writing about Guillermo del Toro (Director of The Devil’s Backbone, Hellboy, and Pan’s Labyrinth, and possibly our finest living mythmaker) and Chuck Hogan’s new book The Strain, that is if the US postal service ever delivers my copy.

2 thoughts on “Undead….again: The Vampire Makes a Comeback (Part One)”