“The new face of horror may very well be the old face of horror.” That’s the idea posited by Larry Fessenden and Glenn McQuaid’s new venture Tales from Beyond the Pale, a collection of half-hour downloadable radio dramas. Judging from the first few episodes: they may be right.

The entire operation is a class act: an aesthetically pleasing website, itunes friendly files, and posters for each episode drawn by Rue Morgue‘s “Ghoulish” Gary Pullin, but it would all be for naught if the episodes didn’t deliver.

Due to both the shortish nature of the episodes and the trend towards “TwilightZonian”/”Talesfromthecrypt-ian” twists, I’ve kept my reviews short and as spoiler-free as humanly possible.

The debut episode “Man on the Ledge” packs the most star power behind the microphone (Vincent D’ Onofrio) but is not necessarily the best of the bunch. Written and Directed by Joe Maggio “Man on the Ledge” features a strong lead performance and a smart script, but suffers from a plot and twist that most listeners will hear coming from a kilometer away. BUT–there’s never anything wrong with a familiar story told well. So as far as pilots go: “Man on the Ledge” is worth your time and $2.

Director Simon Rumley brings listeners the most extreme installment of the first three episodes: “British & Proud.” A truly twisted tale concerning a young British man’s marriage to a mysterious African girl and the resulting “meet the parents” scenario. This is the only episode to not hinge on its twist, and thus is admirable for its straight-forward approach to the story. The voice acting here is uniformly great and the plot offers more socio/politico “food for thought” than the other two entries. 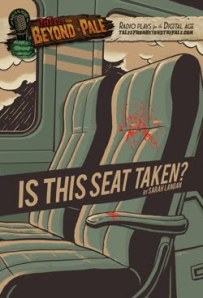 Written by novelist Sarah Langan (Audrey’s Door, The Missing) and directed by J.T. Petty (S&Man) “Is This Seat Taken” is easily the strongest episode of Tales from Beyond the Pale yet. A twisty tale of a not-so-accidental meetings between a man and woman on a train that leads to murder, mayhem and the reappearance of suppressed homicidal tendencies. This may just be me embracing my inner Long Islander (and my inner psychopath) but “Is This Seat Taken” scores some serious points for prominently featuring the Long Island Rail Road. I also enjoyed the way that this episode plays with the idea of an “audio only” experience (the whole thing is told via one of the protagonist’s tape recorder). The episode toys with listener expectation in the final moments without ever confusing. Highly recommended.

I’m more than excited to see what the next few weeks bring and am happy to report that with such a strong start I will definitely be picking up the rest of the episodes as they become available.

One thought on “Hearing is Believing: The First Three Episodes of Tales from Beyond the Pale”