Followers of my twitter know that I’ve been (politely!) spamming John Skipp’s Kickstarter project Rose: The 3D Zombie Puppet Musical. Well, with about 20 days to go, the film needs some more support if it’s going to get made.

Skipp describes the film as “Pee Wee’s Playhouse meets Night of the Living Dead.” For those leery of donating: check out the Kickstarter page, watch the video, read the literature and see that Skipp and the rest of the production have a game-plan and that this film has a great chance of kicking serious booty.

The production is offering some very cool incentives for all the different levels of pledges (from $1 to 5K) but I figured I’d try and do my part to sweeten the deal.

Anyone who pledges on the site (even a dollar) and leaves their name (the one you used to pledge, please) and email in the comments section on this blog will be entered to win the paperback version of John Skipp & Craig Spector’s splatter-punk classic The Bridge. Not only is this a great book, but because of the troubles of publisher Leisure Books this may be one of your last opportunities to own this edition.

As a bonus, if the contest receives more than 30 entries I will add a second prize: The Magazine of Bizarro Fiction #4, which is guest edited by Skipp. This is a weird wild issue that includes stories from frequent Skipp collaborator Cody Goodfellow, D. Harlan Wilson and others. 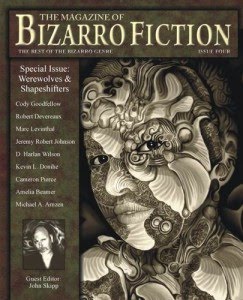 This is a community-based fundraiser, so I’m giving you one more way to increase your odds of winning. Anyone who copys and pastes the message below into their twitter will receive one additional entry:

One last thing, Kickstarter will only charge your credit card if the production team raise all the funds by Feb 24th. But, you will be eligible to win my contest regardless of the team reaching their goal or not. You, literally, have nothing to lose.

If you’ve already pledged just comment below and you’ll be entered. Spread the word!

5 thoughts on “Giveaway: Invest in Horror and Win Valuable Prizes!”