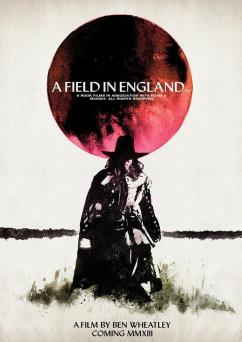 It’s an odd sensation, enjoying a film so much but being hesitant to recommend it to people without knowing them.

A Field in England is fantastic, but it’s also probably not for everyone. 99% of the things I talk about on here (and yes, I’m aware that I’ve been posting at a nearly exponentially diminished frequency) are at least tangentially related to the horror. This film is not. So if your full-sleeve Freddy Kruger tattoo begins to itch at the very mention of venturing outside your genre: leave now.

A Field in England has its share of bloodshed, but it’s certainly not a horror film. Set during the English Civil War, A Field in England is a period piece, one that sees our protagonist shoving his face with magic mushrooms, but is played much straighter than its psychotropic advertising art might lead you to believe.

On Drafthouse’s stellar Blu of the film, there are a few moments in the extra features where the director lists his influences. To be honest, I was quite surprised that he didn’t mention any plays.

It’s not the period language that makes A Field in England feel like it could have been written for the stage, but instead the prevailing sense of absurdity in the first half of the film reminded me of Beckett, Ionesco and Pinter more than it did anything cinematic. Before the film mellows out, the first few minutes (opening in a literal, military barrage) are a barrage of dislocated space and time, partly due to the rush of in medias res dialogue and partly to Wheatley’s quick cuts and purposefully confused camera placement.

This confusion blooms into a kind of road-movie-without-the-road as all the action is restricted to a single field, our three strangers getting to know each other and much of the film’s humor and warmth coming from their absurd exchanges. Whitehead, our bookish protagonist, tries to explain his profession (alchemist, astrologist, etc.) to Friend, a well-meaning rube, but can’t get as far as stars. Friend has never heard of the stars, to which Whitehead replies “Have you ever looked up?”

Wheatley is once again joined by constant collaborators Amy Jump, James Williams and Laurie Rose, worth highlighting because Jump’s script is wonderful, William’s score is hypnotic and Rose’s cinematography is gorgeous. The lot of them form a kind of supergroup that makes each member just as important to the feel of Wheatley’s oeuvre as the director himself. Also returning are a number of actors, none more standout than Michael Smiley, whose O’Neil grounds the film as his goals are straight forward and recognizably villainous no matter how oblique the treasure he seeks or arcane the means of finding it.

The story is slight, but there is a story for those who are not put off/bewildered by some of the film’s arthouse trappings (tableau, black outs, and even a few songs, among other touches). At only 90 minutes, A Field in England moves at a pace that will be sumptuous for those that buy-in and (I’m guessing) drag for those who don’t. The film knows how to structure its escalation and reward patience, though, and it builds to a climactic shootout that has more in common with John Ford than any of the Bergman-esque musings in the 80 minutes prior. The black and white photography is beautiful and it’s definitely a film meant for the biggest screen you can find, it’s nice that the disc comes with a digital copy, but this is not ‘on the go’ watching for your ipad.

One of the things I’ve loved about Wheatley’s filmic output is that although the films share some thematic interests, they are all incredibly different in terms of execution and tone. During the interview included on the disc, Wheatley acknowledges the way that his first four films make a loose quartet and then cryptically hints that he may be moving in a new direction.

Could A Field in England represent the end of an era?

With his next film set to be an adaptation of J.G. Ballard’s novel High Rise, it’s possible. It’s Wheatley’s first adaptation, and knowing the demands of the story and the talent already attached, it should be a bigger budget than he’s seen. But there’s also a way that High Rise feels like a natural progression from Field.

The premise sounds Hollywood “high concept” when you reduce it to a logline: “a class war breaks out in a near-futuristic apartment complex.” But, Ballard’s novel is much more philosophically inclined than that sounds. First off, the “class war” is middle-upper vs. upper class, not what we’re used to seeing, and the titular high rise itself is more a symbol of the character’s anomie and the isolating effect of modernity than it is set dressing plucked out of Blade Runner.

The last filmmaker (in a long line that stretches back to when the book was originally published, I believe) was Splice-helmer Vincenzo Natali, a fine director, but maybe not a perfect fit for the material. If Field, with its deft juggling of the real and the hallucinogenic, the absurdist and the (deadly) serious, is representative of how Wheatley will approach High Rise, there should be a clear line connecting the adaptation with the rest of his work.

And where does he go after that? Hopefully to complete international renown, getting to make whatever he wants however he wants. After hearing that Wheatley worked on the season opener for the new Doctor Who, it’s easy to see his trajectory continue upward to bigger (and maybe more conventional) projects, but I hope that doesn’t stop him and his collaborators from doing what they do best.

If I may continue this line of armchair producing (or cinematic astrology, if we wanted to keep with the theme), I’d like to make a suggestion: if Wheatley is going to continue with adaptations and wanted to loop back around to discussing English folklore, then there’s probably no better material suited to him than Jez Butterworth’s Jerusalem.

Here’s Richard Wells‘ alternate poster for the film, turning one of its live-action tableaus back into a woodcut, bringing everything full circle: 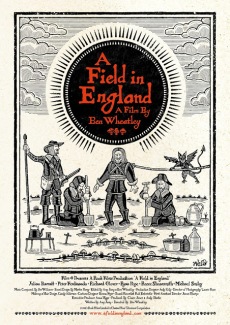 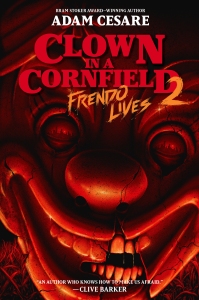