So that previous post? Yeah. I’m going to leave it up but it looks pretty silly to me right now, freshly arrived home from HorrorHound Indy.

How was the con?

Did I sell that one book I wanted to sell? No, I sold many books.

I sold so many books that I ran out of copies of Video Night before lunch on Saturday, with way more than half of the convention to go. Because The Summer Job is my more recent Samhain title, they brought nearly twice the amount of that one, and I still came within a handful of copies of selling out. This is both awesome and hard to imagine, since VN outstrips its younger brother in sales fairly consistently.

It takes all kinds of critters…

So it was professionally successful, in that I was loud, shameless in my salesmanship, and a good number of people there were awesome, into books, and willing to stand and talk to me for a little while, but even outside of the professional stuff the trip itself was also fun as hell.

The representatives from Samhain (Jacob, Matthew and Amanda) couldn’t have been cooler or more on top of things. On Saturday I even got to briefly meet with, Christina Brashear, the president of the company. Samhain is a publisher that cares about its rep, wants to get in good with fandom, and I couldn’t be happier that I’ve got three novels with them. They GET it.

My fellow authors were also gracious and warm. Sales took a hit whenever Jonathan Janz stepped behind the table, but you can’t begrudge the man because he’s so magnetic and personable. Tim Waggoner and John Everson are two authors I was reading way before ever attempting to get published, so to have them be so supportive and open was surreal (John’s also way into Euro-horror, which gave us tons to talk about). David Searls and Mick Ridgewell were on my side of the table, both nice. Mr. Searls just needs to learn how to lie and say that his books have dragons in them, if dragons are what people want.

Having never stood behind a table for any real length of time before, trying to sell books, I was shocked how much fun simply talking to people was.

I’d started to lose my voice by the end of Saturday but it didn’t much matter, I was still flagging people down to take pictures of their costumes or comment on their shirts. It was such a diverse group, young and old, men and women, talkative and shy, folks who hadn’t heard of Samhain and those who approached the table as big fans of their output (“Sorry, Kristopher Rufty didn’t attend this year, but he’d probably want you to buy my book if he was here.”).

I got to talk to parents, students, guys who own DVD labels, librarians, twitterers, special fx artists, filmmakers, journalists, readers (I even tried to convert a few non-readers, was quasi-successful), automotive workers, hospital employees: you name it. And everyone was there because they loved the genre, which is enough to make you want to get weepy.

I’ve already had people I talked with find me on facebook or twitter or drop me an email and I hope to hear from many more. 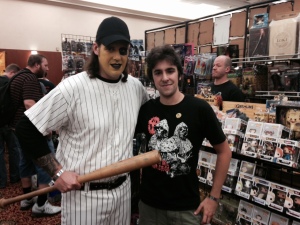 Tryouts with the Furies.

From what I hear, HorrorHound’s Cincinnati show is even bigger and better, but that’s hard to conceptualize after such a great time. No matter where you live, if you’re into horror I urge you to go to this next year. I’m now planning on doing both shows, for as long as Samhain plans to show up in force.

This is not a “pre-order” in the traditional sense, because there will be no other way to get a copy. Once orders are closed, that many books will be printed and you’ll never again be able to buy this edition. If you’re a collector who misses out: you’ll have to settle for either the ebook or paperback, out 9/23.