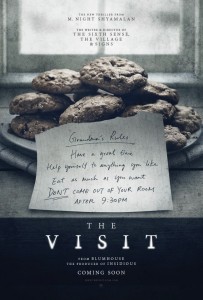 The Visit is going to be heralded as a “return to form” for M. Night Shyamalan.

But in this case not being a return to form is not a bad thing.

Confused? Well, to reveal my own twist in the fourth line: I really enjoyed The Visit.

That “form” that most reviewers will claim Shyamalan is “returning to” will be defined as the two (or three, depending on how Signs tracks for them) movie run that started with The Sixth Sense. A run of movies that is most certainly accomplished, but could also be labeled dour.

And by “could” I mean to say that I’m labeling them as dour.

But what The Visit gets right (and it gets a lot right) had its seeds sown in what many consider to be the writer/director’s greatest failure: The Happening.

Full disclosure: I love The Happening.

And I’m not using “love” in that millennial, groomed-on –Mystery Science Theater 3000, macchiato-sipping, “so bad it’s good” scoffing, post-ironic way. To hell with that.

I genuinely like that movie, and the biggest reason for my affection is how strange it is. How blazingly disrespectful it is to tonal cohesion and the tropes of modern horror it is.

What’s important to note when discussing The Happening is that it isn’t outsider art. It’s not The Room. It’s the product of a man who, a couple years prior, we were all lauding as a director who lived and breathed cinema.

The Happening is an over-written act of hubris, mystifyingly cast and with several moments of deliberate (and very very funny) humor that call into question whether or not the whole film itself was concieved as a put-on. A kind of Them! where the giant ants are invisible. It’s a Rorschach test that has one foot in Shyamalan’s “serious” output and one foot in the ludicrous. That playful ambiguity infuriates most viewers and amuses a small subset.

And perhaps The Visit’s greatest gift is that it makes its sense of humor abundantly clear, as to validate this particular viewer’s take on The Happening.

A 2011 issue of Paracinema featuring my article “What, No!”

The first surprise The Visit offered me was that it was found footage. I mean, I was in the theater on day one, but I feel like I would have been there even faster if I’d known it was FF. You see, I just wrote up a big long defense of the format over at Cemetery Dance Online and have recently found myself in the mood for some discovered footage (he said, indelicately linking you over to a longass essay).

There are two things that are interesting about the film’s found footage conceit. First is that our director/cameraman/protagonist, a younger teenager named Becca (Olivia DeJonge), is an aspiring filmmaker who’s chosen to make a documentary about her first trip to meet her (estranged from her mother) grandparents.

The fact that Becca knows what she’s doing behind the camera means that the film is allowed to have its cake and eat it when it comes to cinematography. Most shots are expertly composed, with moments of directorial self-aggrandizement thrown in when our narrator finds a particularly novel way to shoot her grandparent’s Pennsylvania farm.

Secondly there’s an autobiographical element to making this a found footage movie. It’s a much-mythologized factoid on the bonus features of every Shyamalan DVD that the director has been making movies from a very young age. That makes the precociousness of his lead actress (and the impossibly convoluted lexicon the script bestows upon her) is not only validated by the plot, but meta-text.

It’s also worth mentioning that Becca has a brother, Tyler (Ed Oxenbould). In any other film Tyler could have been insanely abrasive. But in The Visit’s weird twilight-existence between vicious teeny-shocker and children’s adventure comedy, Tyler is the joke-cracking, self-involved, freestyle rapping heart of the film. And if that description sounds farfetched: my first thought walking out of the theater was that this movie has been grossly mismarketed. The Visit plays like Amblin’s take on The Blair Witch Project. And that’s a pretty cool mash-up, to me.

Everything I’ve said so far is playing up the film’s humor and kid-friendliness. But what you probably want to know about a horror movie is: is it scary?

Deanna Dunagan and Peter McRobbie give wonderfully creepy performances as Becca and Tyler’s NaNa and PopPop. They feel like characters that Roald Dahl would’ve created if we snuck a few pages from an Edward Lee novel into one of his manuscripts. NaNa and PopPop are child’s idea of why old people are scary, if we shot that understanding through with an adult’s experience of how mean (and filthy) an aging human body gets.

Rounding out the cast is Katheryn Hahn (Transparent) as the kids’ (largely absent, telecommuting into scenes via Skype) mother.

“So what’s the twist?” I can hear you shouting from the cheap seats.

Well. I’m not going to tell you that, but at the very least I could tell you that there is one. But it doesn’t feel like a “Shyamalan-ian twist” in that it doesn’t alter the movie that came before it in any fundamental way.

There’s a mystery here, for sure, but it’s probably going to be obvious for half the audience (I mean, it fooled me, but I’m dumb).

What’s cool about the twist is the red herrings. There’s an entire subplot that ends up simply being character/relationship exposition and doesn’t feed into the central mystery at all (even though you think it’s going to eventually). I like that approach, it doesn’t feel disingenuous and doesn’t harm the–heightened–“reality” of the picture.

If that last paragraph sounds vague: I’m a spoiler-phobe. It’ll make sense once you see the movie, which is something you should probably do.

The film was produced by Blumhouse. They’ve been knocking it out of the park, releasing the aberrantly mature The Gift just a few months ago and before then have given us a steady drip of reliable spookhouse pleasures (and Whiplash, which isn’t horror but was just my tempo). One has to wonder if it’s the tightened budget and the right nudging on behalf of the producers that resulted in this movie. It feels focused and self-aware, stripped-down but not “minor” in any way.

Nearly completely unrelated: a few years ago I became a Philadelphian, like Mr. Shyamalan. It gives me no end of pleasure to drive up the block to my girlfriend’s childhood home and see where parts of The Happening (“Don’t take my daughter’s hand unless you mean it.”) were shot. Being a townie, by stellar coincidence I happened to be in 30th Street Station while they were filming The Visit, back when it was going by its (superior) title of Sundowning. 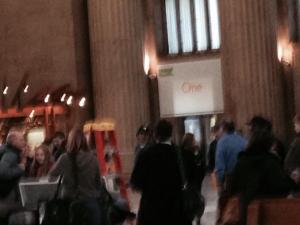 He’s in the middle, in the baseball cap. You can see him, right?

Absolutely, completely unrelated: if this didn’t quench your thirst for old people horror, Random House Hydra has put my novel Mercy House on sale for the next few days. It’s $1.99 for the ebook, down from $5.99. This is for a very limited time, so pick it up discounted while you can. If you’ve already read the book and wanted to leave a review: this is the best possible time you could do that.