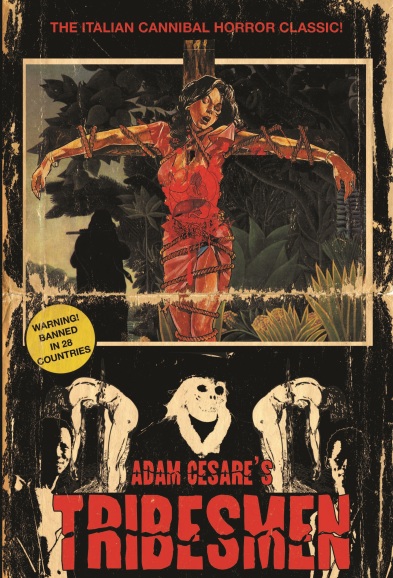 “Sometimes everything goes wrong, in the best possible way. Think Snuff and Cannibal Holocaust meeting at a midnight movie. And then give one of them a camera, the other a knife.” – Stephen Graham Jones, author of It Came from Del Rio and Demon Theory

In the early 80’s – at the height of the ultra-violent “Italian cannibal” grindhouse film craze – a small international cast and crew descend on an isolated Caribbean island, hoping to crassly exploit the native talent. But the angry, undead spirits of the island have a different, more original script in mind. And as horror after staggering horror unfolds, the camera keeps rolling. To the blood-spattered end…

“Tribesmen is a gory and clever homage to those Italian cannibal flicks that we all love so dearly, but without the real-life animal cruelty! Highly recommended.” -Jeff Strand, author of Pressure and Wolf Hunt

“Cesare, in an incredible publishing debut, not only captures what it must have been like behind the scenes of the cheap gore flicks that filled the “Horror” section of video stores in the halcyon days of VHS, he captures the unique thrills of those very same movies.” –FearNet

Available in paperback and ebook from Amazon and Barnes & Noble.