Greetings all, I’ve been doing a fair amount of reading and watching, but a woeful amount of blogging. Nothing’s really struck my fancy in a big enough way to get me typing. That is, until I went to my local comic book store this Wednesday and was struck by a pretty good idea for a post.

Here’s three things you can and should pick up at your own comic-slinging establishments.

I wrote up Garth Ennis and Jacen Burrows’ limited series Crossed a while back. Color me surprised to see Crossed: Family Ties #1 on shelves this shortly after the original series came to a definitive close. But fear not! Just because Ennis has handed the reigns over to another writer for this sequel/spin-off, does not mean that Family Ties is a knockoff/money grab. No, this is grade-A all the way baby. It’s written by the supremely talented David Lapham (Stray Bullets, Young Liars) and illustrated with a wonderful sense of motion by Javier Barreno.

Family Values focuses on a whole new group of survivors (a large Mid-Western family) and pits them against the “crossed” a deranged horde infected by an unexplained virus. Ennis had some scummy survivor characters in his original roster, but Lapham takes this idea of “humans are the real monsters” one step further by making the patriarch of the Pratt family just as despicable as the crossed themselves. The first issue was just as twisted and disturbing as Ennis’ original series and, luckily, never suffers from the much feared “been there, done that” feeling of most sequels. 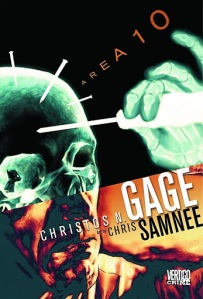 Area 10 is a hardcover graphic novel that is part of Vertigo’s new “Vertigo Crime” imprint, and boy is it fun. Written by Christos Gage, Area 10 is part police procedural and part Seven-style thriller (or MPD Psycho, come to think of it) with an added psyche-out/supernatural element to spice things up. Despite the large page-count he has to fill (nearly 200), artist Chris Samnee (who has an awesome sketchbook/blog here) is more than up to the task, and turns in some truly terrific black and white compositions.

What Vertigo is trying to do with this series is admirable: bringing back crime comics in a high quality, one-and-done format. I’ve heard mixed reviews of some of the other titles in the series, but if Area 10 is any indication I will be picking up a few more as soon as I can spare the cash.

I could probably have spent a whole post talking about how cool this book is, but that would spoil the fun for you, and make me have to write more. So there. 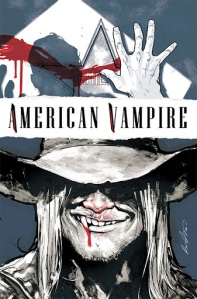 There’s been a lot of Stephen King work in comics lately, but they’ve been adaptations (The Stand, Dark Tower) and none of them (I believe) have been written by the man himself. Enter Scott Snyder and artist Rafael Albuquerque’s new ongoing series American Vampire. In the series’s first five issues Snyder splits each page count with King and they both write stories taking place in a separate time period. In the first issue released last month, this worked absolutely flawlessly. Snyder’s half of the issue deals with a young actress dealing with the pitfalls (and fangs) of 1920s Hollywood while King’s half details the origins of a mysterious cowboy in the 1880s.

If #2 has a major flaw, it’s that it’s no #1. There are some growing pains and quite a few pages are taken up with clunkily delivered exposition. Despite this shortcoming the art remains top-notch and there are some interesting twists in vampire lore introduced.

It’s too early to tell how it will fair in the long run, but American Vampire is off to a very promising start. I wonder how King got involved with the project, but I imagine that Vertigo is seeing sales boosted immensely by his name. That said, I also suspect readers may prefer Snyder’s half of the story to King’s, which good news for Vertigo as is a strong reason for them to stick around once King’s tenure is over.

Before this week, I had never read Stephen King’s Cujo nor seen the 1983 film adaptation. Now I’ve done both. It’s against my nature and I will not reveal the ending to either the book or the adaptation, but for this writeup will contain minor spoilers. You other late comers have been warned. (Gimme a break I know it’s thirty years old.) 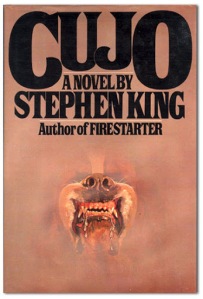 Now, don’t let the fact that I’ve never read Cujo before shake your faith in me. I’ve read plenty of King, both the classics and his newer stuff. I’ve loved some of them and I’ve not-so-loved some of them. The first school project I can remember doing was on the man (it was for a third grade project where we had to read a biography and then make a book report in the shape of a wire hanger mobile) and my first ‘real’ term paper (boy, was I wrong in thinking that rinky-dink thing in high school was a term paper). If I were asked as a senior in high school what my favorite King Novel was, I would have said: The Stand. Hands down. In fact, in high school, I probably would have answered The Stand if you asked me what my favorite book was. Period. I still love it, but these days maybe the cornucopia of allegory is a little too much for me.

Enter King’s 1981 novel Cujo. King claims in On Writing, which is great, that there are one or two novels that he can’t remember writing at all due to drugs and alcohol. If Cujo is the result of drug abuse: where do I sign up for my flour sack full of coke? Yes it’s a sick joke, but you get the point.

Cujo is dark bordering on nihilist (I say bordering, not nihilist). It’s the kind of book that has you tied in knots over what’s going to happen and has you cursing the author when it finally does. It is bloody and grimy. The character list is long and they are all fully fleshed out. The most remarkable thing for me about Cujo is its structure. There are no chapter stops, only scene breaks where the story switched perspectives. We see inside each characters head, are privy to their decision making processes and the way they feel about others, then just like that we are whisked to a different character. Cujo is not a short book, but the lack of chapters makes it a breathless one. It isn’t exactly a book you can’t put down, but a book you feel rotten about having to put down. There is just no “good” place to stop. It’s as claustrophobic as a blue Ford Pinto on a sunny day ( I can’t resist sometimes).

I don’t mean to sound hyperbolic and gushy, it’s just true. Our tastes and attitudes are constantly in flux. Outside of its brilliant structure and crisp prose ( beyond the cliche of “crisp” I would also describe it as possessing that great “late-early period” restraint that King never quite uses now) there is something about the darkness and frustrating honesty of this novel that appeals to me on an almost primitive level. Maybe one day when I have a wife and kids, my favorite King novel will change again to suit the times. Maybe it will be Cell… Got ya!

If the novel isn’t really ‘about’ a killer dog, it’s not, then what is it about? Well (says pretentious professor Adam), it’s about the way people reason and make decisions. How sometimes even when those decisions are the most natural and level-headed they can still result in absolute disaster when life throws a monkey wrench into the equation and goes veering impossibly off-script. It may sound like a mouthful, but I think this idea of chaos is the very core of the novel.

So the movie must be about the same thing right? Wrong, silly, the movie is about a killer dog.

On the special features for the recent 25th anniversary re-issue of the film director Lewis Teague says that the initial script from the film had been penned by King himself, but was rewritten because it “strayed too far from the book.” D’oh. What I wouldn’t give to see that version of the film.

Cujo isn’t a bad film at all. It has first rate cinematography, great production value and effects and one of the most believably frightened child actor ever put on screen(what the hell did they do to that kid?). The script is serviceable and is faithful almost in its entirety. The broad themes from the novel all make at least a small appearance: Donna’s fear of losing her spark, Vic’s pressure at work, the remarkable abilities for a child’s subconscious to attune itself to the problems around him, and the idea that one shouldn’t “sweat the small stuff” because you never know when reality might turn and bite your face off.

The problem is that all these themes are so watered down in the film. In actuality this is probably a good thing, there is no easy way to cue an audience in on every thought that enters a character’s mind. To translate that whole idea of “decision making” i rambled about a few paragraphs ago, Teague would have had to use narration. Which would make the film unwatchable in its obviousness and corniness. The end result is that the film is probably the best direct adaptation of the book that can possibly have been made.

Maybe in some far-flung future, when there are no more copies of the book in print, the film will be a worthy piece of art to be analyzed without the stigma of the novel. As it stands now it is only an interesting way to open up discussion of the novel, a well made genre film with a modest budget, some neat dog tricks, and a great performance by one of horror’s perennial matriarchs: Dee Wallace.

It’s no substitute for the book: but what film is? It’s a fun monster movie with all the schmaltzy parts and fake-out scares you’ve come to expect from passable Stephen King adaptations. Hey, it’s a helluva lot better than that miniseries they made of The Stand.*

*I’ve heard some people actually like that thing. Other than the cast, why? I’m not being a jerk, I genuinely want someone to explain what I’m missing.