Okay. I’m busy today so have to keep this short and sweet. And what better way to do that than with bullet points?

Awesome, right? It was directed by Mike Lombardo and his fine Reel Splatter folks. Mike’s done a lot of great shorts (I highly recommend you check out The Stall) and when Shock Totem reached out for him to help out with this project, I was allowed to head out to Lancaster, PA to watch part of the shoot. I could not be more grateful for the crew’s hard work. Not only did they shoot this commercial, but they took some high quality photos depicting other scenes from the book, those extras will be included in the Limited Edition. 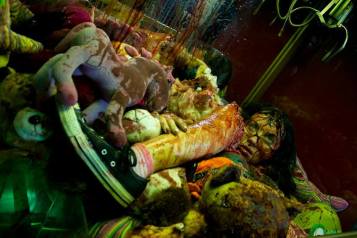 Haunted Video Arcade? Then it’s a given that someone’s going in that claw machine, right? Dismembered actress/PA Kaleigh B. is pictured.

Second, you should know that there will be both paperback and ebook editions of Zero Lives Remaining. Those will be available in December, I think. This is not a full novel, but a novella.

The “early adopters” who pick up the limited edition not only get the hardcover, the sick VHS case, the gorgeous interior illustrations by Nick Gucker, and the photos, but also a bonus short story. The story is one of the best I’ve ever written, it’s called “So Bad” and it’ll be new to you if you haven’t read the (soon to be sold out) issue of Splatterpunk where it originally appeared.

So, yes, $45 dollars is a lot of cash to spend on a short book (it’s about the size of Tribesmen or The First One You Expect, if you’ve read those) but you will get some awesome bonus goodies and there will be a more affordable version later. I say this all upfront so nobody feels like they’re being ripped off. I know some of you may be new to the idea of signed limited editions, since I’ve never had one of my books appear in this “boutique” format.

Thirdly and finally, you should head over to Shock Totem to reserve your copy. I was a bit late getting this post up, so a bunch of these have already been spoken for. These will sell out, so if you want one: jump on it.

I love this book, and I think you’re going to like it too.

Also, looks like those bullet points were kinda ill-fated, eh? Oh well. Brevity is the soul of wit…